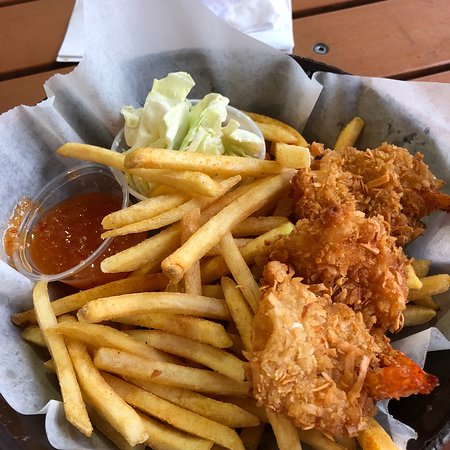 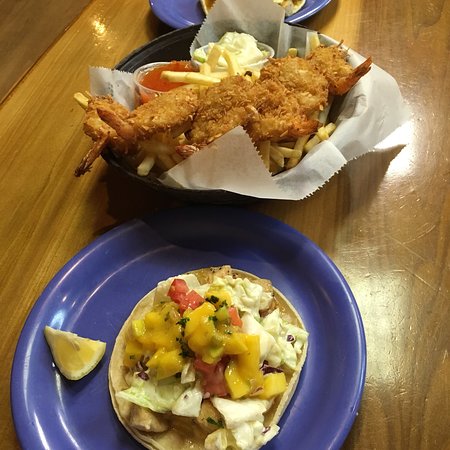 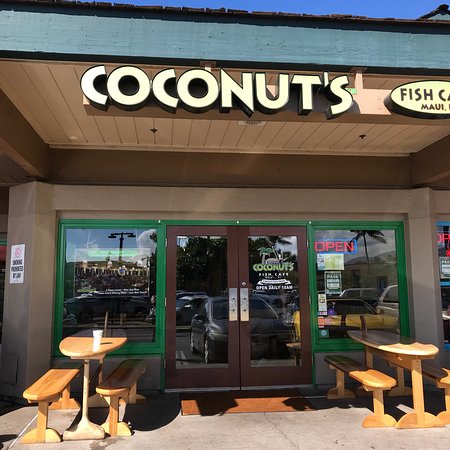 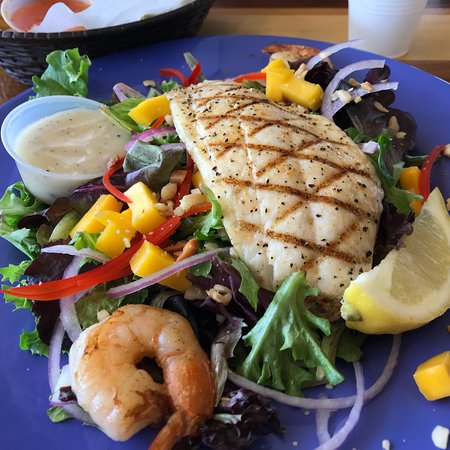 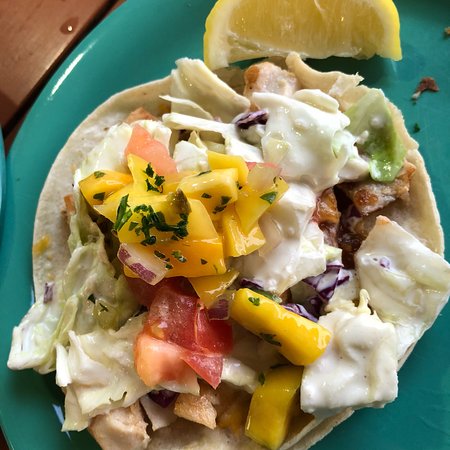 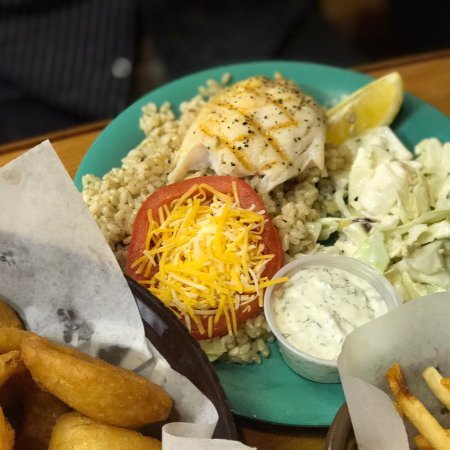 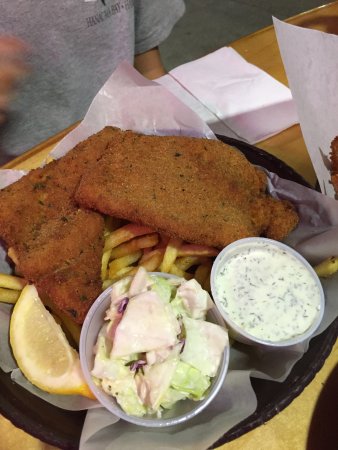 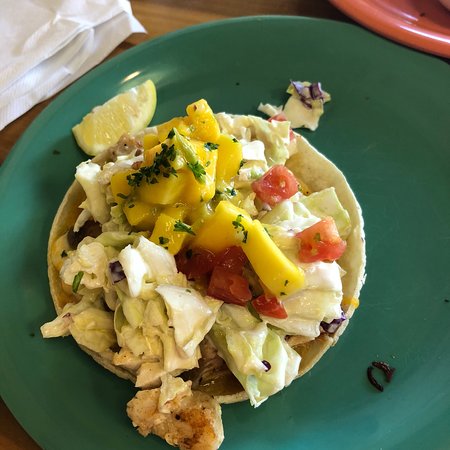 With two Kihei locations, Coconuts offers awesome fish tacos, fish burgers and much more at very reasonable prices. Plus, the portions are huge - bring your appetite to this South Maui institution!

We came here for breakfast and everything we ordered were delicious!

-papaya bowl- delicious! I normally don't like papaya but OMG, it was so fresh and the perfect sweetness

- Coconut Glen ice cream- we got the trio (coffee toffee, green tea, and coconut. Our fave was the coconut (very refreshing and taste very coconut-like). The green tea tasted like chocolate mint ice cream. The coffee toffee tasted just as it sounds. All of them were delicious!

Located right next door from the condo so another easily walk. Fun decor, nothing fancy, but good fish taco and slaw.

Best fish tacos on the island! One order is big enough for two to share, so it becomes an excellent budget choice as well.

We have found that we LOVE fish tacos since we started coming to the island. This is simply the best place to get them.

Cute place with generous portions. Fresh fish, burgers and plenty of choices for everyone! The kids menu is also great!

Fresh local caught fish made to order. We love the wasabi ahi tuna fish burger! Get there early because the lunch crowd swoops in quickly!

You must get their fish tacos!

Everyone who comes into this place will end up getting fish tacos because they're known for the best fish tacos in down. You can also get their tasty fish and chips as well.

Great portion, great price, and great service. I hope you give this place a try. Cheers!

3.5 stars. This casual strip mall spot is known for the fish (mahi mahi) tacos, which were good but not wow. The coconut shrimp was a standout. Friendly service.

BEST FISH TACOS. EVER!!! Other food looks good too, but we stick with the tacos.

Coconut's came highly recommended and lived up to the reputation. The lemon pepper seated ahi sandwich was one of the best ahi presentations I've ever tasted. I will definitely be back.

Extremely fresh ingredients and you can tell a lot of love goes into their food. The fish tacos have 14 different ingredients and combine into a mouthful of flavors. The coconut shrimp is a must order, my husband enjoyed them even though he isn't a coconut fan. I will definitely be back the next time I visit Maui. Large portions and great service!

Largest and best Fish Taco on the Island. The fish you eat for lunch arrived at breakfast!

We absolutely love this place! Great food and a great staff. The fish tacos are some of the best we've had anywhere and the fresh fish "burger" are very good and filling.

Melt in your mouth fish tacos! Definitely order the fish tacos with the south of the border sauce on the side. You'll want to savor those delicious 17 ingredients in at least one bite before you pile on that amazing spicy sauce (if you enjoy adding heat). Know that if you come when there's a line that snakes to the front patio that it could take awhile to get your food. It took 35 minutes before we got our tacos, but man was it worth the wait. I've never had fish tacos that are this good and this well priced. Plus I loved the fact that the chef/owner, Brian, wanders around asking how you like the food. Bonus: They sell, what else, hand painted coconuts for $16.99. You know, in case you need to buy something else after scarfing down two ginormous fish tacos!

Although the cafe was packed when we walked in, we were lucky to be able to snag one of the last two tables. The ambiance is lively and was filled with families - i love these inconspicuous yet popular spots!

Ahi Tuna Burger (me): I ordered this seared and with wasabi as it was suggested, but I was a bit disappointed. The wasabi was overpowering, but I found the sandwich overall to be quite bland - especially considering the thickness of the sesame bun it was served in. I think the ahi would be much better served in tacos, personally.

Fish and Chips: Not your typical beer-battered and deep-fried, which I actually liked! They were well crusted and quite moist and delicious. I loved the side of tartar and the fries were amazing. Skinny, well-seasoned, and perfectly crispy. Quite surprising since the "chips" are often an afterthought served as thick-cut potatoes. Both items complimented each other vied for your attention.

Shrimp and Chips: I didn't actually try the shrimp, but was disappointed to find so few shrimps on the plate! Maybe half a dozen or so? My sister seemed to like them, although they weren't too special. The fries were the same as the ones served with the fish - yum!

Ono Fish Burger: I have never had Ono before, but I liked it! My brother ordered it cajun-style, so it was well-spiced without being spicy. The fish itself was flaky yet firm, and was well-complimented by the other burger ingredients.

Ono Fish Plate: My mom ordered the same fish as my brother, and it came with sides of brown rice and coleslaw. Although the fish was good, my mom mentioned the both the coleslaw and brown rice were both bland. Disappointing. I'd say see if you can substitute fries with this one.

I belatedly realized that nobody ordered the infamous fish tacos and I insisted we get an order and share them.

Fish tacos: I am SO glad we ordered these and was actually upset that I didn't order them for my main. They're made with a mixture of Mahi and Ono, along with "an additional 17 ingredients." They're served in two flour tortillas with coleslaw and mango salsa. I was actually quite skeptical of this hodgepodge of ingredients, but oh my gosh. The best fish tacos I've ever had (I don't eat them that often, but still). All of the ingredients were so good and worked well together. No one ingredient overpowered the other, and the fish was fresh, flaky, and not at all "fishy." We ate every last bite despite being full. Trust me - even if you're in the mood for something else - get the fish tacos!

Although there were a few items on the menu that were on the "just okay" side, the overall quality and taste of the fishes, fries, and more importantly - the fish tacos - make this a place I would recommend to any visitors to Maui.